Responding to a Woman Wanting to Help Boys Become Men 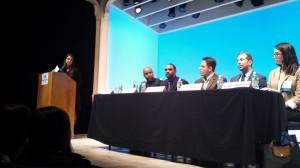 “The Mask You Live In” Panel

It was a simple question, really. A woman sitting near the back of the dimly-let theater, in the center of a row full of young men, had asked how she, as a woman, could get through to the young men with whom she worked. The entire panel paused and the moderator scanned our faces, as the Jeopardy music – that seems to make time stand still – sounded as though it were playing in the background.

Who’s going to answer this one, I could see the audience thinking.

After taking a breath, and getting the go-ahead from my fellow panelists, I reached out and grabbed the microphone. My answer went something like this:

It’s tough, right, to be a woman teaching teenage boys how to become young men. So on the one hand, you certainly want to acknowledge your woman-ness going into a male space. It doesn’t mean that you cannot permeate that space, though. But that you definitely want to acknowledge the barriers and challenges that will come along with, as a woman, trying to teach teenage boys how to become men.

On the other hand, you can’t let being a woman stop you from working with young men, and teaching them about masculinity.

Again, this is a complicated issue, with no magical, quick-fix, singular type of solution. So I’ll try to break it down into a few specific, concrete steps – First, as a woman you have to build trust and (much like the my fellow panelist articulated in a previous answer) show the young men that you love them. That you have their backs.  This isn’t easy, and you will encounter challenges along the way. But, I worked with one school counselor, who tells me how she had developed such a close relationships with her male students that they would disclose all of their sexual escapades to her. Using the same profane, colorful language they would use as if she were male. In this respect, trust and love are the foundation for building and leading men.

Secondly, as a woman, you can introduce young men to men who can serve as mentors. This isn’t to take away from the many lessons you will teach these young men. But, it means connecting them to men who have certain areas of expertise, like fixing cars or managing stock options. Guys who coach sports or play musical instruments. In our collective effort to remove the shackles of macho, misogynistic, violent definitions of masculinity from our teenage boys, it would behoove us to connect our youth with men from different backgrounds, who represent the many forms of masculinity and who are outside of the Man Box. Not just so our young men can determine the versions of masculinity they want to emulate, but so they will develop networks, and support systems of men, from which to learn and draw wisdom.

Finally, as a woman, you want help young men build skills and competencies that they will carry with themselves for the rest of their lives. Skills and competencies that will help him carve out who they are, versus who everyone else wants them to be. When you encourage the young man who has a strong interest in dance and choreography, to pursue his passion, you are teaching him to embrace what makes him unique, and not follow the crowd. When you suggest that another young man plays sports when he shows athletic inclinations, you introduce him to the concept of teamwork and being a part of something that is greater than himself. But probably the best way to help instill in young men life skills and competencies, is to role model these traits yourself. The single mom who works 3 jobs, teaches her son just as much, if not more, about work ethic, sacrifice, and perseverance than that young man could ever learn from anyone. (Parenthetically, which is why athletes who are recognized at the highest levels will thank and recognize the contributions their mothers have made, in helping them become the men they are today.) So keep on doing the great job that you’re doing; just know there is a payoff at the end.

In putting this all together, a class or course on masculinity could be really valuable. Just like students learn about English, math, Spanish, and history, so too should we encourage and steer our young men to examine what does it mean to be a man, in structured spaces, using purposeful methods. That could look like young men having a weekly masculinity group. Or participating in recreational activities, and then journaling about what that sport or activity is teaching them, about life. Or connecting with male mentors, and identifying the versions of masculinity they would like to emulate. This could also be taking young men to museums and aquariums, arranging for tours on college campuses, having them volunteer (or do internships) with businesses and non-profit agencies. The young man who is cultured will have more opportunities from which to draw, and carve out, the type of man he wants to become, and not succumb to the stereotypical Man Box.

In the end, though, what you really want to look for in the young men that you work with, is conflict. That strife or ambivalence. That thing inside of a young man that is struggling with the machismo, violent, misogynistic versions of masculinity that he sees, compared the type of man that he wants to become. For, if we can get our young men to that tipping point, we can show them the greener pastures, and have them choose versions of masculinity that are healthier,  more empathetic, less violent, more accepting of women as equals, less likely to need to prove one’s own masculinity, and take the road less travelled.

All of these things, and many others, you can teach the young men that you work with. I know what it’s like. I grew up in a household full of women, and I am the man I am today because of it!

A Different Take on Masculinity

A few days ago, I sat on a panel that discussed the idea of masculinity, and how the idea of masculinity is hindering adolescent boys from blossoming into their authentic, non-violent, non-misogynistic, non-abusive selves. Anyone who doesn’t see how masculinity, or hyper-masculinity, is harming our adolescent boys, they ought to watch the trailer for “The Mask You Live In”. Or, consider data out of New Jersey, that 75% of domestic violence incidents are perpetrated by men. Or that most of the school shootings are carried out by men. Or that, from another study, 99% of people who purchased sex, were men. Or how nearly all sexual assaults are perpetrated by, you guessed it, men.

So, what we have in our society is not only a problem with violence, but it’s a problem with men using violence to abuse, stalk, rape, exploit, demean, force, and purchase women, girls, and, other (presumably, weaker), men. How can I say that? Women are brought up our country, but women don’t have nearly the same infatuation with aggression and violence. Women aren’t carrying guns and doing drive by shootings. Women aren’t lighting up schools with bullets, out of some misguided vengeance.

But, simply looking at the boys and young men of today, and waving a finger, as if to say, what’s your problem, isn’t taking into account the full scope of the issue. Sure, boys and young men are committing some of these horrific acts. But where are they learning these behaviors? We can’t simply say society, because you, me, we all make up society. Nor can we simply say, that’s the way it is, because we make it the way it is. Just like we use our voting power to put a president into office, or our financial power to drive up a company’s profits, we use our social power to instill in boys and young men certain traits that we deem valuable. Like using violence against women.

So this idea of masculinity that so desperately needs changing stands at the footsteps of men. Adult men, more so than teenage boys learning how to become men. When we, as men, demean and hurt the women in our lives, our sons are watching. When we make comments about how a girl put herself in that situation – referring to sexual assault – our young men are listening. When we criticize men for not being man enough, our boys are paying attention.

This issue – of helping the younger generation of boys and young men – redefine masculinity is complex. There is no singular answer that will solve the entirety of this dilemma. But one area that we must look at, that we must hold accountable for its influence, is adult men, and how we give adult men a pass when they reinforce violent, misogynistic, and stereotypical definitions of masculinity.

When we turn a blind eye to Chris Brown and his violent outbursts towards his then girlfriend, we send one message. When we demonize Jay-Z for his attempts to de-escalate and remove himself from a physical encounter with his sister-in-law, we send a supporting message. A message that says It’s okay to abuse a woman if she gets out of line, and that real men don’t take shit from women. That she, somehow, deserved or warranted it. That message is real. It’s one that adolescent boys and young men are trying to unlearn. But, it’s us, the adult men that keep reinforcing it, every time we demand that boys man up. In both our words, and in our actions.

Certainly, I don’t absolve teenage boys and young men from the violence and aggression they enact in our world. But, let’s not kid ourselves, and pretend boys aren’t learning those behaviors. It’s men, who need to change if we ever care to see the young men of future generations dare to step outside of the confines of the man box.