Reflections from a Tim Wise Address 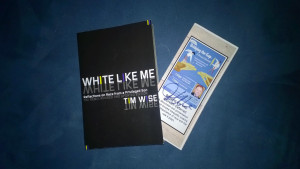 Not only did I have the luxury of getting Tim Wise’s autograph, I had the privilege of attending an event where Mr. Wise gave a riveting address. It was absolutely outstanding. To borrow a line from the sitcom “Martin”, it was all that and a pot of grits! I had heard plenty of Mr. Wise’s lectures and talks on online channels, but this was different. Being in the room and hearing the inflection in his voice when he spoke the most salient points, listening to the quickness with which he sometimes spoke (which reminded me of my own fast-talking style), and sensing his frustrations over a student who tried to monopolize the Q and A session, those were just some of the advantages I could have only received by attending the session with Mr. Wise, in person. It was akin to drinking orange juice with pulp. Sure, in essence, pulped orange juice is the same as orange juice without pulp. But the pulp is a flavorful reminder that you are drinking orange juice. Not apple juice or cranberry juice. Not fruit punch of Kool-Aid. But, orange juice. Similarly, seeing and hearing Mr. Wise speak in person, was a flavorful reminder of where I was, and more importantly, why I was there.

The messages Mr. Wise delivers resonates with me for a multitude of reasons. One of those reasons is that he (being a White male, taking on a supposed Black issue, delivering it to mostly-White audiences) has made the discussion about race and racism easier to have, to the extent that discussing race can be easy, that is.

See, I’ve noticed that whenever I speak about race, racism, or racial constructs, SOME of my friends who are White (and even some who are Black) respond that I’m being too sensitive, that I need to have thicker skin, how it’s only a joke. In much the same way my male friends reply that I can’t take a joke because I don’t laugh when comedians who use rape as comedic material. I won’t laugh at the horror suffered by a survivor of sexual violence, just like I won’t laugh at the pains suffered by someone who’s been afflicted with cancer.

It’s almost as if they’re saying, why do you care so much about this. Well, for starters, the discussion about race or racism is not purely an intellectual conversation for me. It goes much deeper than that. Here’s what I mean, I’d suspect that people who have not been targeted because of their race are able to have a dialogue about racism from a purely intellectual perspective. What they think about racism, much the same way one can talk about a fire that’s happening in another state. It’s from a distance. It’s something that someone else is experiencing. So the thoughts and ideas are conceptual or idealistic. As in, if people are experiencing harassment by law enforcement, they ought to comply because, in the end, officers of the law are here to protect us. Well, in an ideal world, yes, that should be the case for everyone. But, we live in America – a land that, while it has its advantages, it is far from idealistic.

So for me, and I’d suspect this to be true of other Black folks, a dialogue about race, racism, and racial constructs is way beyond intellectual. It’s first psychological, then emotional, and then further down the line, intellectual. Given the same example as above, when people of color experience harassment by law enforcement, it stimulates painful memories of an uncle who told stories of cops taking him down by the docks so no one could hear him scream. Or stories about people like Emmitt Till, murdered for supposedly whistling as a White woman. Or stories, and images, of our enslaved ancestors, whipped, kicked, spat on; raped, pillaged, and torn from their families. Harassment by one officer is never just that. For us, it’s always linked to the historical treatment of our people. Treatment that was legal, at one point in time. I sometimes ask myself why in the world would America find it wrong that police harass Black folk in 2016 if it was legal for police, and any other White citizen, to kill Black folk in 1955? Even in 1968, when Dr. Martin Luther King was assassinated? We’ve had some major accomplishments in the past 50 years, but elements of injustices are still alive and well.

Then, it moves to an emotional level. Fear of being killed. Anger for the way my grandmother was berated by a White cop. Frustration at the calculated prejudice, targeting of Black and Brown folks, yet turning the other way when the same actions (criminal, suspicious, or not) are committed by White folks. The agony knowing officers don’t give a shit about you. The hypocrisy stirring inside – sure your great-great grandfather may have fought for this country. But, he had no more rights than a dog. Not able to vote, own his own home, or pursue the supposed American dream. Now in present-day America, while you may have more advantages than your great-great grandfather, you still are without many of those same freedoms.

If you’re able to move past those states, then, perhaps an intellectual conversation about race can be had. But it’s pretty hard to be unbiased, when you’re the recipient of all of the biased behaviors. It’d be like someone asking you to give an opinion about home invasions that does not take into account the thousands of times your home was burglarized. Or having an unbiased stance on drunk driving laws, when your parents were killed by a drunk driver. It’s damn near difficult to not see racism in many of the injustices inflicted upon Black and Brown folks when so much of the historical treatment of Black and Brown folks was racial. In many respects, these two worlds are simply not mutually-exclusive. Not, one, bit.

So, to my friends who are White, that’s where I’m coming from. When you hear about a Black teenager that was killed by a White police officer, it may not even trigger an emotional response. But perhaps, an intellectual comment – so sad. And your empathy is good, so don’t get my wrong. But when I hear about a Black teenage that was killed by a White police officer (or vigilante citizen) – Tamir Rice, Trayvon Martin, Michael Brown – I shutter, knowing very well, the next Black male could be me (although I am far from a teen). Or worse, my son.

We all have fears. Some are irrational and humorous, like people who fear they’ll be eaten by a shark if they step foot in the waters of Lake George. Other fears, however, are warranted, like fearing you might be killed by a police officer if you don’t comply, or sit in your chair as he barks order, or disobey a command, or look him in the eye, or possess anything that could be mistaken for a weapon (whether it be a toy gun or cell phone box), or makes the officer fear for their life. These sort of justifications sound eerily similar to the reasons slave owners gave for enslaving our African ancestors, beating their slaves who were disobedient, punishing Blacks for wanting more rights and freedoms, and legalizing the mistreatment of Black folk who advocated for equality. It wasn’t that long ago that it was legal, that is, not against the law, to beat abuse and murder Black folks who misbehaved.

If America wants me, and other people of color, to lay down our fears, it first must be willing to lay down the ill-treatment of its non-White citizens. Whether Black men, or Persian women. More than that, we should be prosecuting White police officers who kills Black teenagers the same way we prosecute any other murderer. But also, owning up to the racist past that our country was built upon and working to create a more equal tomorrow.

I’m not asking America to pay for the years of counseling I’d most likely need to get over my fears, anxieties, and paranoias. What I am asking is that America stop breathing life into those fears because Black folks aren’t allowed to have mental illnesses, but that’s another subject for another day.

If you Do it Right

Home } Creative Space } If you Do it Right

As I continue working on A Matter of Semantics second edition, a NEW lesson has worked its way into the revisions. Here are parts of that new lesson, raw and uncut. Enjoy!

But, if you want this unforgettable, magical, intoxicating sort of college experience, you have to do it right, and give the experience all that you have – the full complement of your time, energies, and focus, as though you were in a monogamous relationship. You have to take advantage of the myriad of opportunities your college experience will present and afford you and not just those that are within your comfort zone. You have to allow yourself the ability to transform as a result of the experiences you will encounter, and not fight reality when you realize you have grown into someone new, someone different, or someone your high school friends no longer recognize.

There is no underestimating the impact of the college experience. It has the ability to change your life, for the better.

This life lesson – of dedicating yourself completely, fully, unselfishly – one you can carry with you in every facet of life. Whether you’re in a committed relationship, on a sports team, involved in an organization, or pursuing graduate studies. If you want to get the most out of those experiences, you have to commit yourself.