Seat at the Table

Home } Adulthood } Seat at the Table

For all of the young people out there (especially), and my social-justice warriors too, struggling with the results of the election, this one’s for you.

With many of us still in shock – and indeed, disheartened – over the results of the very-heated election, I’m reminded of a conversation I had with one of my students. A conversation that is befitting of this particular set of circumstances, as we look for some way to channel our energies, going forward.

I listened to her speak, hoping, just hoping I would be able to offer her some piece of wisdom. After all, she had come to me out of confidence and being one of my favorite students, I owed it to her to not only not steer her off course, but actually help her navigate muddy waters. After listening and reflecting, I came up with – Don’t give up your seat at the table.

It was a literal table that I was talking about, but a figurative one as well. I desperately wanted her to consider how powerful her voice was. Whether she exercised her voice or not, there was (and is) power in it. I wanted her to know how removing herself from a space where key decisions were made, would ensure that she could not (and would not) be a part of those decisions. I also wanted her to know – and, indeed, consider – that as a woman, with her foremothers fighting just to have space at the table, as a product of those sacrifices, she is absolutely deserving of that space. That if she had given up that space, she would be giving into the patriarchal system working to keep women in their place – and that’s not at the table.

Given where we are at this time – the conclusion of the 2016 presidential race…some voicing their outrage at fellow Americans who voted for the president-elect…others filled with glee over the changes he might bring – I look back to that conversation, and to those words, hoping I can heed my own advice.

Don’t give up your seat at the table.

I know it will be gut wrenching and will make your skin crawl. Hearing sexist comments, jokes about sexual violence, and other, as it was described, locker room talk. Knowing that men have a virtual license to engage in such behavior because of little, to no, accountability. Taking it one step further, a license that actually encourages men’s degrading behavior and treatment of women. Being at the table, knowing you (or your mother, wife, daughter or sister) are the object of ridicule or objectification can feel utterly helpless. But that’s when you cannot give up your seat at the table. See, as with all things in life, the tables will turn, and if you give up your seat now, you may never get it back.

I know it will be scary and intimidating. Seeing a certain population of men carrying guns professing it’s because of this constitutional rights, with swastikas (or other divisive symbols) tattooed on their skin, spewing hatred about taking back their country, making their presence known, looking to instill fear into the hearts of anyone not part of their clan. They needn’t be a part of some militia; no, just an ordinary guy proclaiming that we should just “leave”, if we’re so unhappy. For some of us, these images are not fiction, but realities of everyday life. There is constant fear, or at least a threat, that they are coming for us. More than that, there’s an understanding that the justice system will let these men inflict violence and intimidation. (They haven’t been held accountable before, why the hell would it start now?!) But, don’t give up your seat at the table. If we’ve learned anything from our fight against terrorism abroad, it is a lesson of not letting terrorists move us from our day-to-day routine. So when these guys alter what we do or how we do it, they win. When they discourage us from exercising our voices, they win. When they instill in us a fear of being at the table, for what violence that are capable of inflicting, they win. We can dismantle this sort of divisive, hateful America by not giving up our seat at the table.

And I know it will be disheartening, knowing politicians are just itching to pass law to subjugate our constitutional rights. Making it so that some of us cannot adopt children, or get married, or access our partner’s medical records, all because of our sexual identity. All but treating us as though we are not actual people, but people who needs to be healed, or somehow redirected, to conform to their heterosexual ways. We may as well be one of The Others, like a monster from Chuck E. Cheese’, with horns, warts, and fangs, the way co-workers, politicians, hell, even family members, treat us like outcasts. When we get so disheartened that we feel like giving up, remember we cannot give up our seat at the table. It’s not that one president, alone, will take us back to a sexist, racist, homophobic America. But the scores of people who put him into power can bring us back to that America if we give up our voice (thus our seat at the table).

Those words that I shared with my students are applicable (I think!) to those who feel scared of, angered by, and dishearten at the results of the election. My student didn’t know this at the time, but I was fighting back tears as I encouraged her to sit with her detractors, work with them, and strive to let her voice be heard. Days after the election, I feel a similar sadness. Still, in the spirit of heading my own advice, we should look to do the same – that is, how can we work with our opponents because, after all, we are not giving up our seat at the table. It’s just as important now, as it ever has been, to keep the spaces that our forefathers and foremothers have fought for, spaces that we’ve earned, spaces that we can influenced. So although we may not feel an infinity towards the president-elect, let us not give up our seat at the table. For, as Matt Damon said in Good Will Hunting­, “cause fuck him that’s why”.

The shape, the mask, the music. Everything about the movie “Halloween”, used to scare the shit out of me. Back when I was a kid. Who saw shadows even in the darkness. Who heard noises and never knew that houses settled. Who ran from the boogeyman as soon as the lights went out, terrified that he might do to me what he did to them.

All grown up now, I no longer believe in the boogeyman. Not that boogeyman at least. Not the one that wheels a large kitchen knife or has an appetite for blood. No, this boogeyman is different.

I remember telling myself that work – a profession or even a career – was just an entity that helped earn an income. That it didn’t have any other value besides that. Until this past summer, when I began to feel him following me.

I’ve been a stay-at-home dad for a little over 5 months. It’s a never-ending job, really. One that cannot be quantified in the typical 9-5pm time frame…knows no boundaries (my daughter regularly bursts in the door when I am using the bathroom)…and does not allow you to take sick days or go on a break. Sure, it doesn’t produce income in the traditional sense; but it does produce years of nurturance and emotional connection. Priceless memories that I will cherish forever. Teaching my son how to swing from monkey bars. Basking in my daughter’s laughter as she chases bubbles.

And yet, because I have not been acquiring income in the traditional sense, I saw a silhouette of his figure behind every bush. Reminding me that I should be working.

Work. That entity that most of my employed friends tell me they wished they were doing differently. My best friend from college is a veterinarian but wishes he raced cars. Another friend in the corporate world longs for a career making and selling her own wine. Not exempt, in my previous job, I wanted to be an author and leadership trainer. All craving a different life. Or, at least, a different part of life. Even when we have it, we want something different. The boogeyman, feasting on our hopes and dreams, until they become the nightmares scaring us to death.

I try tell myself work shouldn’t define me this much, knowing it’s not the truth. Everything piece of academic and intellectual fruit I’ve eaten since my days as an undergrad tells me differently. That everything I did in college and beyond was for work – so that I could have a job, and always have access to a job. That while work does not have to define you, it should be a strong part of you. That if you’re not working, it had better be for a good damn reason; otherwise, you are the issue – it’s not work’s fault you’re unemployed. That as a man, you have but a few purposes in life, and work is one of them, if the primary one.

That’s when the bone-chilling music runs through me. When I know I cannot escape the thoughts. I. Should. Be. Working. Looking for relief, I step into the next room, and stop. He’s staring right at me. Expressionless mask. Blue jumpsuit. Fingers wrapped around a kitchen knife. Shit, I better run. 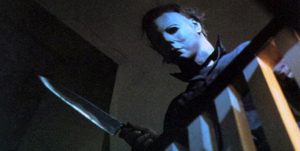