An excerpt from the book I am current working on/editing:

Home } Creative Space } An excerpt from the book I am current working on/editing: 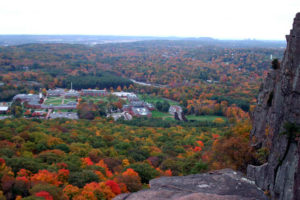 “I want to show you something,” Amanda said, leading Ashleigh inside the brick castle that resembled a dungeon. In and out of small entries, and climbing steps that felt as if they would give out at any minute, they walked to the top of the castle, until they finally spilled onto the roof.

Ashleigh gasped. The view was breathtaking. Row upon rows of trees stretched as far as she could see, yet they felt so close that she could almost touch them. The foliage was the most brilliant shades of canary yellow, pumpkin orange, forest green, and scarlet red that Ashleigh ever remembered seeing. The view was beyond stunning, it was surreal. A view that you could only find on a postcard, or in a Bob Ross painting. Nestled in the mountains, in a small New England town, a small part of Ashleigh began to heal as she allowed herself to feel lost in the beauty and charm of what would be her home over the next four years.

“After everything I’ve been through with your father,” Amanda whispered, as she stood next to her daughter, taking in the view of Quinnipiac. “I’m not going to tell you to not let this affect you, or tell you that time heals all wounds, or something bullshit like that.”

“Thanks mom,” Ashleigh said, leaning her head on her mother’s shoulder. She loved that her mother cursed. It showed that her mother was chill, and actually gave a shit, unlike most parents who were caught up in their image and what people think of them.

“But, I brought you up here today, Ash, because I found this on the Quinnipiac website, and thought you might like to see how beautiful this place is.” A single tear rolled down Amanda’s face. In a few months, Amanda knew she would be losing her pumpkin, her pride and joy, the only reason she left her abusive, ex-husband.

“I know you’re into landscapes and stuff like that,” Amanda continued. “So I thought you’d appreciate this view.”

Amanda didn’t mind that her daughter cursed. For her, it was the one vice Ashleigh was allowed to have. Besides, she told herself. I can’t really get mad at her when I curse like a sailor. And sometimes, saying fuck makes everything feel better.

“I thought you’d like it,” Amanda added. “I also wanted you to see,” she continued. “That life can get better. I know it may not seem like it now. With everything that you’ve just went through, I know it may feel like life hates you. But it doesn’t,” she reassured her daughter. “I can’t tell you why this happened to you, all I can do is be there for you. And I’ll always be there.”

Ashleigh found a comfortable spot in her mother’s arms, and wept. Amanda kissed her daughter on the top of the head, the way she did when Ashleigh was a little girl.

They both giggled. Amanda’s aversion to cleaning the bathroom meant Ashleigh and Kevin were constantly on bathroom duty.

“I’m here for you pumpkin, whenever you need to call, I’m here for you. And I know it doesn’t seem like it right now, but there is beauty in life, and you’re going to be attending the most beautiful school in the world.”

Ashleigh took out her cell phone, and snapped a picture of the view. Then she put her arm around her mother’s neck, and took a selfie.

“I don’t want you to let what happened to you, stop you from following your dreams and pursuing your goals,” Amanda said.

“No one can make you feel inferior without your consent,” Ashleigh whispered.

“What if I said I wanted to study English,” Ashleigh asked. Part of her knew this wasn’t the right time to bring up her a change in career plans, the other part of her knew there would never be an opportune time.

Ashleigh laughed. It was surprising and reassuring to hear her mother’s approval.

“You can accomplish anything you put your mind to,” Amanda continued. “Don’t let some asshole stop you from following your dreams. Do so, in spite of him. In the words of my favorite movie,” Amanda said.

“Cause fuck him, that’s why,” they both said, and Amanda smiled.