What College Students Taught me About Ferguson

Home } Random-ness } What College Students Taught me About Ferguson

Leave it to college students to help break me out of a funk. I can’t deny, I was disappointed, disgusted, and downright disheartened over the grand jury not indicting the officer who killed Mike Brown. Another Black life taken, from an officer sworn to protect and serve. More than that, another message was sent, that the lives of young Black men do not matter, or, at least, do not matter as much. (Matter as much as what? I’ll leave that up to you.) All day my mind went adrift – What if what happened in Ferguson, happened in New Jersey? What if I were pulled over, and, unbeknownst to me, I made the officer feel so “uncomfortable” that he drew his gun on me. What if I was Mike Brown?

And then I saw this. 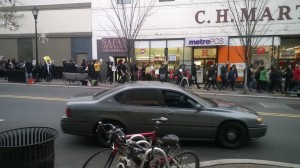 A swarm of Rutgers students marching and chanting, chanting and marching. Black students, Brown students, and White students. Holding signs, screaming about the injustice that happened in Ferguson, voicing their displeasure. It was an inspirational sight to see, but then it became more than that. It showed me what we should be doing, about our collective displeasure. Not just sharing our opinions on social media – although that is important and helpful. But, actually taking a stand, in whatever way feels organic to us.

College students have the opportunity to use academic and social resources – taking classes to learn more about complex issues like criminal justice or psychology; and holding rallies and marches to protest injustices, all over the country.

While adults may not have the time to protest every, single, injustice, we do have other resources to tap into – namely, our occupational and economic resources. Here’s what I mean:

Teachers can help, by using texts, theories, and reading materials by authors and experts who are Black and Brown, gay and lesbian. In the classroom, we can do a better job of helping students value the contributions from these so-called other voices by bringing them to light, and not just during Black History Month. We teach students, on a year-round basis, to value the contributions of African-Americans, and they’ll go from compartmentalizing the contributions of African-Americans, to accepting those contributions as just as much a part of their fabric as their own history. Taking it a step further, books like Howard Zinn’s, A People’s History of the United States can help students go from simply regurgitating what teachers want to hear, to actually thinking or themselves.

Cops and police officers can help, by working within the system, to change police practices that normalize violence against underprivileged, inner-city, Black and Brown boys. I’ve heard all about the code amongst police officers. The brotherhood and fraternity. But, what about the times when an officer clearly uses deadly, and unjustifiable, force? We need the good police officers to hold the bad police officers accountable, like this video from MSNBC suggests.

Similarly, lawyers can help by holding their own accountable, as well. Prosecutors who don’t bring charges against murders. Attorneys who don’t provide jurors with enough evidence to render a guilty verdict. Sometimes, it seems that the lawyers are either incompetent or ignorant. We need the good lawyers to hold the bad ones accountable, and we need the good attorneys to step up and work on the side of justice in these cases.

Financial planners, insurance salesmen and women, and doctors can also help. It may not be with their time, but they can definitely help by donating money. Boys and Girls clubs all over America work to serve underprivileged communities, and with more financial help, more teens and adolescents can attend after-school programs, get academic support, and learn job-readiness skills. No, this may not solve racism, or violence from police officers to Black and Brown teens. But it will give those Black, Brown, and underprivileged teens the resources and skills to become their own best advocates.

Speaking of advocates, and social workers, they too can help. Not just by doing their jobs, helping clients find and organize their voices, find and practice healthy coping mechanisms. But also by advocating on behalf of clients who cannot stand up for, or advocate on behalf of themselves. Advocates and social workers can also be helpful by practicing self-care. The more the professionals who care for underprivileged teens take care of themselves, the better equipped they’ll be to fight for what is right. Self-care is not a luxury; it’s a part of what makes for an effective clinician.

We ALL can help, by electing officials who show compassion and value for Black and Brown lives, for the LGBT community, and for women. We need to elect more officials like Elizabeth Warren, instead of Todd Akin.

More than that, we can also help by valuing Black and Brown lives every day. Whether you’re a member of a Black and Brown community, or not. Let’s hold protests to end gang violence. Let’s start programs to get guns off the street. Let’s stop wearing shirts with slogans like Don’t snitch. Now, this is not the same as a White officer killing a Black teen, simply because the teen is Black. But, buuuuut, we can’t simply be moved by the killing of a Black teen when the murderer is White. If we’re going to say that the lives of Black and Brown teens matter, they have to matter all of the time, and not just the time that fits an aesthetic.

Even members of the media, like CNN, can help. The more we villianize teens like Trayvon Martin and Mike Brown, talking about the teenagers’ failures and wrongdoings, the more we perpetuate the notion that it is okay to murder, or take Black lives, because in the end, they’re all monsters, anyway. I take exception to that rhetoric. Black lives matter when it comes to entertainment, but not when it comes to violence, right newscasters?

But not only that, let us all put pressure on legislators to take a stand by repealing laws that have come to serve as a platform for furthering racial injustice, and enacting laws that criminalize racial, gender-based, economic injustices and practices.

Our artists and entertainers can also take a stand by not promoting or putting our music, movies, or video games that glorifies and violence and the devaluing of Black and Brown lives. We can have the debate as to whether art imitates life or life reflects art, but one thing we cannot deny is that violent media messages have an impact. Just read the diatribe of school shooters, or mass murders, and we find that when teens listen to music, watch movies, or play video games with violent content, that content begins to impact their decision-making skills, as suggested by Brad Bushamn, professor at Ohio State University, and other notable researchers. This isn’t to say violent video games cause school shooting, only that there is a correlation – aggression levels are raised and empathy towards others decreases. So when artists spit ill fire – “But nobody saw when I…smoked him, roped him, sharpened up the shank then I poked him” (courtesy of Twain Gotti, a hip hop artist who rapped about a murder he allegedly committed) – the message sounds eerily similar to that of the Black and Brown teens who are murdered at the hands of those who are supposed to protect and serve. The message being we don’t value your life.

Artists and entertainers can even go a step further, and take a stand by using their voices to bring attention to such injustices. Check the transcript of Jesse Williams!

For me, everything starts at the top. So, even the president of these United States can take a stand by voicing concern about violence against Black and Brown teens, as well as injustices towards the LGBT community, women (no matter their political ideation), and others. And when the president speaks about these injustices, as he did following the death of Trayvon Martin, we should applaud his efforts (just as we did when the president spoke, just as passionately and staunchly, after the Newtown school shooting) instead of crucifying him. We want the president to take a firm stand against foreign threats, but we want him to pretend the lives Black and Brown teens don’t matter when the threats are right in our own backyards.

I learned something from watching those college students march, today. I learned that if this issue truly outrages us all, there is something that we can do. In ways that feel organic, and make sense for us, simply by tapping into the resources that we already have.

Don’t speak out about injustices now, and run the risk of who will stand up for your brother, who’s gay; or your daughter, who marries a Latin man; or your best friend, who suffers a stroke; or your old college roommate, who contracts HIV; or your sister, who experiences sexual and domestic violence in her marriage. If you don’t take a stand for any of them, who will be there to stand a stand for you?

This case was about Mike Brown, but when you think about it, it’s also about so much more.

Like Loading...
AbdulStaten, November 25, 2014. No Comments on What College Students Taught me About Ferguson. Category: Random-ness, Social Justice.